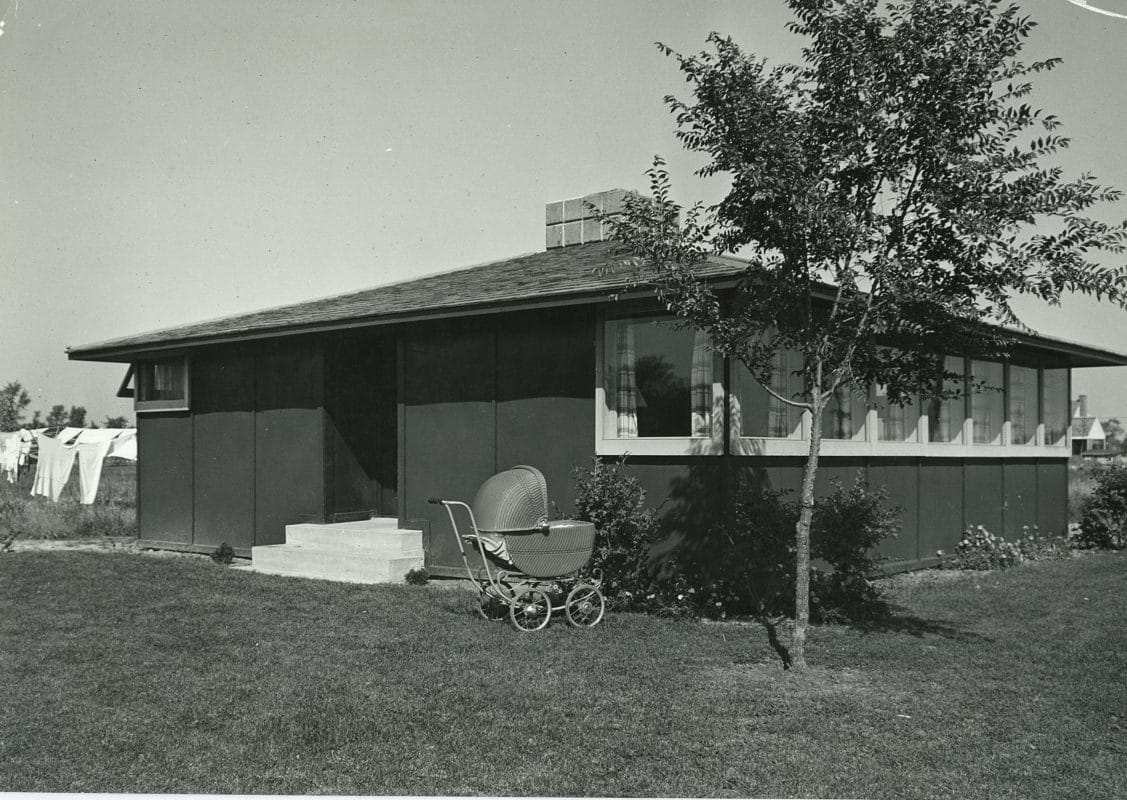 F. W. Lewis was an accountant for the Dow Chemical Company. The first sketches for his modest house are dated 1933, with construction completed a year later for $2,500. At approximately 900 square feet, it marked the beginning of Alden B. Dow’s abiding interest in the design of low-cost housing.

A one-story square structure, the Lewis residence is topped with a broad hipped roof held in place by a square unit block chimney in the center. The exterior is clad with Masonite attached to the wooden frame by battens. A uniform band of 4 foot by 4 foot casement windows provides an attractive scheme of repeating elements on the broad horizontal front elevation. Each of the seven casement windows pivot from the top, allowing them to be propped open and held with sticks, the same ventilating idea used by the architect in the first drafting room of his studio.

The entrance is located in the middle of the west side of the house, and the door opens onto the side of the fireplace with the living room immediately to the right. The broad sloping lines of the roof, culminating in the unit block chimney, create a visually-uplifting element on the interior ceiling. It follows the angle and lines of the roof and is covered with Celotex boards held in place by battens.

The floor to ceiling verticality of the unit block fireplace is split by two strongly horizontal planes – the mantel and a more prominent cornice four feet above it that extends from the entryway through the fireplace and into the kitchen area on the far side of the house. A built-in seat extends at a right angle from the fireplace, the tall back of which serves as a partial wall for the compact 6 foot by 9 foot kitchen.

The private zone of the residence is behind the chimney and one step up from the public zone. Mr. Dow initially offered his client two different plans, one with two bedrooms and one with three, making the design adaptable as well as affordable. The Lewises chose the two bedroom option. Both bedrooms open onto a narrow corridor defined by the back of the hearth.

The F. W. Lewis residence was placed on the National Register of Historic Places in 1989.