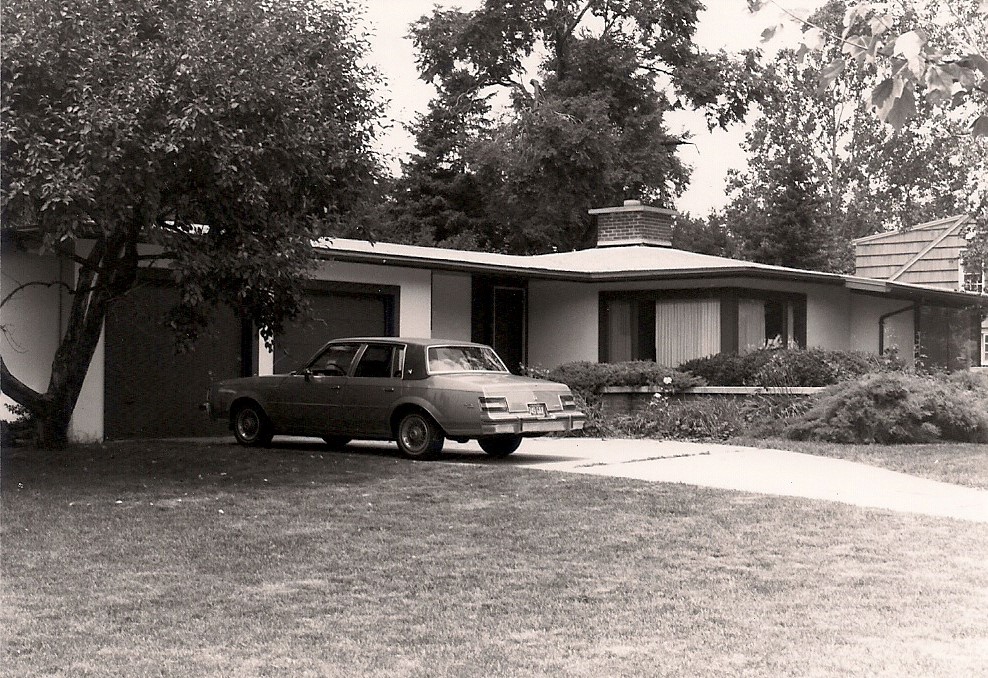 The plans for the E. G. MacMartin residence were drawn in late 1940 and early 1941. The Alden Dow Building Company received the contract to build this $7,500 house. Work began in February 1941, with construction to be completed by July.

The MacMartin residence is one of the smaller homes designed by Alden B. Dow. The prominent features of this simple square structure are its low horizontal lines. A shallow hipped roof caps the stucco-sided house, except for the front corner where it projects outward over the large living room window. At that point the roof dissolves into a trellis, easing the transition from the roof to a light covering over a patio. The patio extends from the entry across the front and around the side of the house. A three-foot high brick wall separates this area from the yard and nicely balances and extends the horizontal lines of the house. A single-car garage is built into the house opposite the patio.

The recessed front door opens directly into the living room, without any transitional hallway. Straight ahead and across the room is a fireplace with built-in shelving to one side. The large window in the living room projects outward from the plane of the house, forming a bay window with a built-in seat under it. At the other front corner of the house is the dining room and beyond it a small kitchen. The back half of the square floor plan contains a bathroom and three modestly-sized bedrooms placed along the back wall.

In his article about the architecture of Alden B. Dow in the May 1942 issue of Pencil Points, Talbot Hamlin highlighted the simplicity of “… the little square MacMartin residence at Midland. I feel that in this house, small as it is, Dow has achieved a complete integration – graceful, direct, and human – that strikes a new note in his work.”