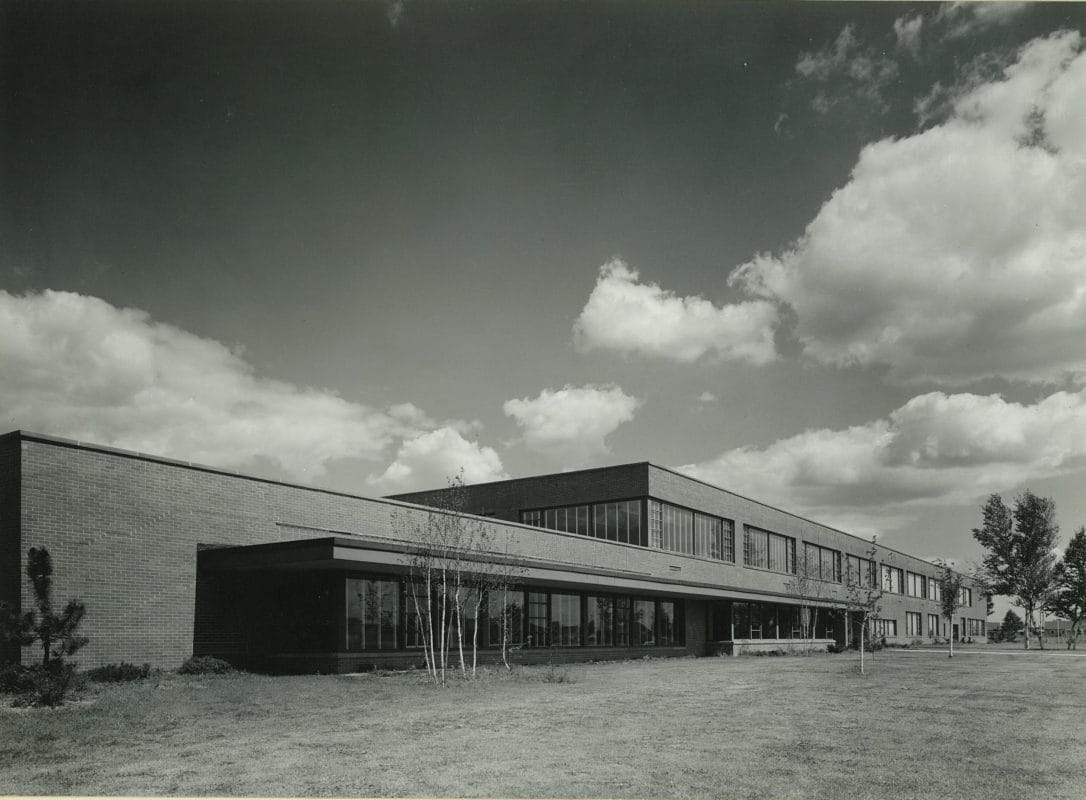 (Although it was initially called Northeast High School, it never was used in that capacity and its name was changed to Northeast Intermediate and then Northeast Middle School.)

Alden B. Dow designed Northeast Intermediate School in 1949. It is an L-shaped two-story brick structure that uses ribbons of windows to bring light into classrooms and hallways. At the time of its dedication in November of 1951, it was recognized not only for its functional design but also its “modernistic beauty.”

So many of Northeast’s features were original and forward-thinking. “This building was the first to incorporate sloping chalkboards,” Mr. Dow pointed out in correspondence with the features editor of the journal, Progressive Architecture. “It makes it much easier to write on the board its full height and also easier to see.”

The arts and crafts room was 90 feet long with a slanted ceiling and clerestory windows. Noted Midland artist Charles Breed was the school’s first art teacher. In an oral history interview recorded for the Home & Studio, he recalled his first impressions:

“When I opened the door to the art room, I was amazed and elated. It was better than most college art rooms at that time – with a separate area for jewelry-making and a room for ceramics with beautiful oak woodwork on the trim and storage areas.”

Margy Lee attended Northeast as a student and later served as its principal from 2001-2009. Now a tour guide at the Home & Studio, she describes what it is like to learn and grow in the environment created by Mr. Dow:

“Northeast Intermediate, now Northeast Middle School, is a warm and welcoming space. The library is surrounded by windows, letting nature in and imaginations out. The Little Theater features wide steps leading to the beautifully crafted wooden stage. Many young thespians began their careers in this space. The main office and classrooms are enhanced by built in wooden cabinets and bookshelves adding to the function and warmth of the building. The Little Apartment, originally designed for home economics classes, boasts one of the few fireplaces found in a modern school. Its wall of windows again highlights the natural setting of the building.”

During his long and distinguished architectural career, Mr. Dow’s educational projects numbered around 80, 11 of which were in Midland. Northeast Intermediate School is just one noteworthy example of his belief that architecture holds the power to enlarge the human imagination and enrich people’s lives.